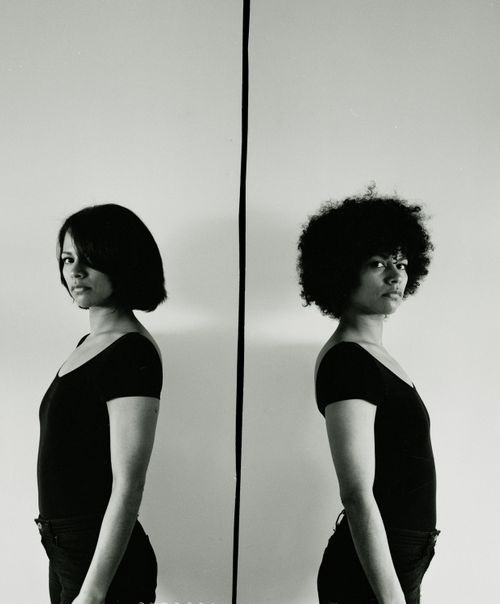 I am a Canadian Haitian artist and photographer born in Canada; I spent most of my childhood in Central Africa (Gabon) before moving to Dakar in Senegal and then to Paris (France). In 2017, I began exploring my Canadian-Haitian heritage; I took a DNA test and reached out to 1,224 people who share segments of my DNA. This marked the beginning of my attempt to research and construct an extended family portrait that articulating my reality: "As a person of mixed race, you portray the collision of two worlds. But you can also consolidate two distinct universes. I am white and black, I am Canadian and Haitian».

From 2014-16 I created two photographic series, Hair and Leopard, in which I documented the style and cultural signifiers found throughout the African continent and beyond, illustrating methods of portraying beauty and power, and initiating a discussion about identity and the relationship between Africa and the West.

My work has been exhibited widely, including in Cape Town, Amsterdam, Dubaï, Milan, Paris, New York, Toronto, Lagos , Dakar, and Singapore. In 2017, my shows included:

In 2019, I was invited as a guest speaker at National Geographic seminar ; in 2018 I was an artist in residence with Residency Unlimited in New York and with ELA-Espaço Luanda Arte in Angola. My work has appeared in numerous international publications such as Le Monde, Le Monde Magazine, Vogue, The New York Times, Dazed, ID-Vice The New Yorker, and Foam.

For more information about her work check this interview, Interview Magazine.

Emilie Régnier: 'I am white and black, Canadian and Haitian', Financial Times

I’ve always been quite restless. After graduating from high school in Montreal, I studied fashion design, then visual arts, then social science. Eventually deciding that Montreal winters are too cold, I then made plans to become an offshore oilrig diver. Finding I was claustrophobic, I traveled instead to Australia and Indonesia where I fell back in love with photography, a craft I had practiced from an early age. I returned to Canada, studied photography at College Marsan from to 2004 to 2006, then worked as a photo assistant for various Montreal photographers before moving back to West Africa and pursuing my photo career fulltime and work as a photographer for more then 10 years.

In September 2020, I will start an MFA in Photography at Concordia university.

2016 Hair, festival of fashion and photography of Hyeres ( collectives)

2018 Dazed Magazine, The Salons of Abidjan

2017 New Yorker, The meaning of Leoprad print, May

2017 Huffington Post, The alluring power of Leopard print, in photo from across the world, April

2017 The Cut, This photographer examines African Beauty and Beyoncé, April

2017 Dazed, The women of the Ivory Coast channeling their inner Beyoncé

2016 I AM, Emilie Regnier photographe, March